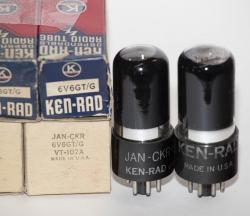 Another sleeper of the 6V6GT varient. Sound excellent in my Princeton Reverb, Deluxe Reverb and tweed Gibson (similar to Fender Tweed Deluxe) amps. Bold and clear and transition into a nice creamy overdrive when pushed hard. Best buy.

There are certain tubes that exemplify a clear aspect of their respective eras. The Golden Age of 6V6 productions, to
me, had ended by the mid 1950s.ﾠ The RCA 6V6GT signified the culmination and end of that era.ﾠ The VT-107, in its several forms, is a true pinnacle within that short-lived period. The Ken Rad, which appears as part of the GE family of the VT-107, is a wonderful tube. It is similar to the Sylvania in that it has an incredible clarity and warmth from the upper bass region, on into a very sparkly and extended high frequency range.ﾠ The Sylvania versions I have (GT and not G) are very sharp and slightly edgy.ﾠ The GE and Ken Rads, by contrast, exude warmth, but do not sacrifice clarity.ﾠ The family together seem to resist being
pushed too hard.ﾠ The breakup occurs more rapidly than the classic RCA.ﾠ Consequently they require more sensitivity inﾠ playing through them, in order to maintain control into the distortion range.ﾠ The RCAs seem easier to control overall, but
lack the beautiful midrange presence exhibited by the GEs and Ken Rads.ﾠ And the Sylvanias seem nearly razor sharp by comparison.

>My verdict on the Ken Rad is that they are absolutely necessary.ﾠ My life is suddenly more complete.ﾠ They are great for Country, Pop and Rock guitarists who don't need to stray too far into overdriven Blues-Rock.ﾠ And they are definitely not
Metal or Grunge.

By the way, they were tested in a '57 Tweed Deluxe.

Thanks once again.
Richard Schense

Thanks for the Ken Rads!ﾠ They sound great (in a Deluxe Reverb).

There are no products in your shopping cart.