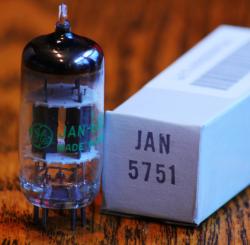 Number one choice for guitar amps where lower gain and smoother tone is required. These remove harshness in some guitar amps.ﾠﾠ

You’ve won me over with these! It’s crushing in a Rivera k Tre and engl fireball 100. I loath hiss and fizz. Absolutely love clarity and articulation. Thanks friend! Jason

Hi Mike, just wanted to let you know that the two JAN 5751 tubes arrived and sound outstanding in my Soldano SLO.  Compared to the 5751s they replaced, they clean up a lot better with my guitar volume knob and definitely have the low noise floor that was promised.  Thanks for packing them well, USPS absolutely mauled the box but the tubes are working great.  Cheers!

"I was all set to dump my DSL 100 because I was sick of the harsh treble and undefined distortion. Your recommendation to add a Mullard CV4024 and GE 5751 were dead on. With the Mullard in V1 and GE in V2, the amp sounds like a new animal. The distortion is round, and smooth, yet still very aggressive, and the cleans are great as well. My rhythm work sounds so defined, even at high gain, and the leads just have nice, thick fat edge to them. Overall, the Marshall sounds so much more musical and articulate with these tubes in it. It really puts the JJ's that were in it to shame. You've totally opened my eyes to just how much of a difference tubes can make."

There are no products in your shopping cart.